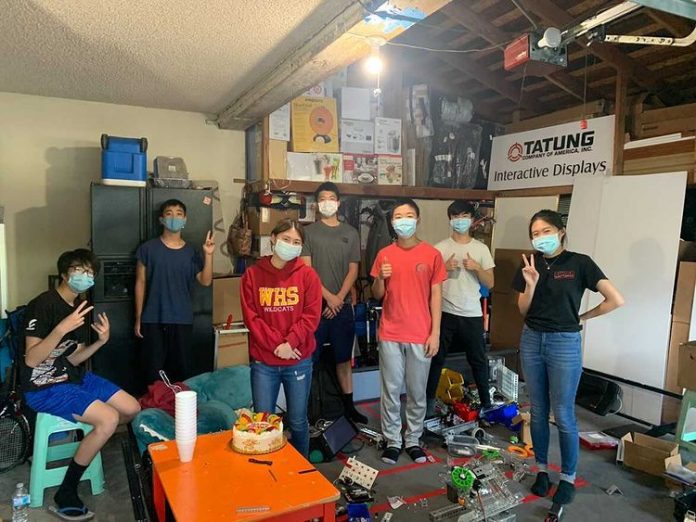 Benjamin Xie (11)
How does robotics make advancements in the scientific field?
“Robotics makes things more autonomous. For example, [completing] everyday tasks using robots or artificial intelligence reduces human error and [labor]. One example [of how robotics promotes autonomy] would be self-driving in cars such as Tesla that do not require a human driver.”

How would you use your knowledge in robotics to create a change in the world?
“The robotics team does more than just building robots. Through programs such as the STEMinar, we [aim to] spread STEM to underprivileged students in our district. In this particular program, we had STEM professionals and college consultants [talk about their experiences] in high school and how they got to where they are today. Our district is underfunded so not all students have access to [quality STEM programs]. We offered this seminar to help those who were willing to attend so that they may be able to have a better insight into the STEM community.”

How long does it usually take you to create a robot?
“When we build a robot, we do it throughout a season. We start in September and end in April. There is usually a world competition [in May, but due to COVID-19, it was canceled].”

What is your favorite video game of all time?
“Right now, it is League of Legends. I watched some streamers play it and I decided to pick it up during quarantine. It is very fun and addicting due to the competitiveness of the game. When you win, it feels rewarding and when you lose, it makes you want to win again.”

Jessica Huang (11)
What does it take in order to be a great roboticist?
“I think a main part of being a good roboticist is having good teamwork and sportsmanship because communicating with the team is the most important part in creating a well-functioning robot.”

What is the most fun part about being in the robotics team? “I would say that the most fun part about robotics is being able to see the work that we have done over the season come to life. Whether it is about the programming or building aspect of the robot, seeing the robot score points and move around on the field in competitions gives us such a rewarding feeling because it reassures us that we are on the right track.”

How has robotics helped you improve as a person in general?
“Robotics has helped me build new friendships and learn to step outside of my bubble. Through robotics, I learned how to present a plan to others, network, program a robot and much more. It reassured me about what I want to pursue in college and that I [prefer] working with a team to [achieve a common goal].”

Nathan Lee (10)
How have you improved as a roboticist since you first joined the team?
“Throughout this season, I saw myself improve in terms of critical thinking as I had to find new and different solutions to the problems we encountered.”

If you could create any kind of robot you wanted, what would it be able to do?
“If I could create any robot I wanted, I would make an artificial intelligence robot that could help with my day-to-day activities.”

Max Lee (10)
What unique strength do you bring to the table as a part of the robotics team?
“My main responsibility in the team lies in the technical aspects of building the robot and I would say that that would also be my strength.”

What advice would you give to someone who wants to pursue robotics?
“In general, there are a lot of opportunities [available that range from] clubs to companies that want more people in the STEM field. [Because of the shortage of] women and minorities in this field, [companies want to give them more representation] and it would definitely be a great decision to take advantage of these opportunities to learn more and develop your interests.”

Do you believe that robots can become more advanced than humans?
“That is absolutely possible in the future. When you look at artificial intelligence, they are getting more and more advanced every day. The only problem that I see is the emotional aspects.”

What would you do if you won a million dollars?
“I would put all of it inside of a bank account or invest it in order to earn more interest.”

What qualities does it take in a person in order to create an effective robot?
“Since you are working as part of a team, you have to learn how to work collaboratively with others and stay determined in case everything does not go according to plan. [Having this determination is important] in overcoming these challenges.”

If you could stop an invention from being made, what would it be and why?
“I would stop the invention of nuclear bombs because they have the potential to kill a lot of people and it [would be catastrophic] for that amount of power [to fall into the wrong hands].”

Kevin Xiong (10)
What made you interested in joining the robotics team?
“I have always wanted to find an outlet to express my creativity while improving upon my [logic and] team-building skills. The robotics team allows me to [sharpen my] problem-solving skills by solving problems with mechanisms while working together with someone else.”

Have you had any prior experiences with robots before you joined the team?
“I did not. When I tried out for the team, I had no experience in engineering and robotics. But being a part of it taught me [how to create a robot] in a unique and fun way.”

How do you think robotics will affect our future?
“Robotics and science will be able to revolutionize the way we live by eliminating problems [through automation] and making medical procedures safer and more advanced. [Through robotics], space travel will also become easier like how [astronomers sent a] robot to Mars last year.”

What is your favorite invention that has been made?
“My favorite invention is the computer because it is a very helpful tool in engineering. [It makes it easier to] record and keep your data by searching information up and writing it down. [It also can be used in other ways such as] a form of communication. I usually use it in order to talk to my friends through Discord.”

Michelle Lam (10)
How does robotics help students improve their engineering skills?
“Robotics prepares you for a lot of things at a really young age. We talked with engineers and they were impressed because of our similar tools and strategies that they also [use professionally]. Robotics is very helpful for [those considering a major in engineering] because it gives them experience and it allows them to improve in the future.”

What is your favorite robot that you have programmed?
“My favorite robot is the one we built this year called Snorlax because it is big and bulky. It can launch rings at a goal and [I like it because] it is different from other ones we have made [due to its] catapult mechanism.”

What is your proudest accomplishment as a part of the team?
“We have gotten a lot of awards and despite working remotely, I am proud of the fact that we achieved a lot of stuff. [This is my second year in robotics] and it makes me proud to see my teammates and I grow and accomplish so many things.”

What is something that you would like to be invented in the future?
“Something that I would want to see are nurse robots in the engineering and medical community. I would like to see innovations [like these] in the medical field similar to Baymax from Big Hero 6 that are like personalized assistants that can [perform diagnoses] and body scans on patients.”