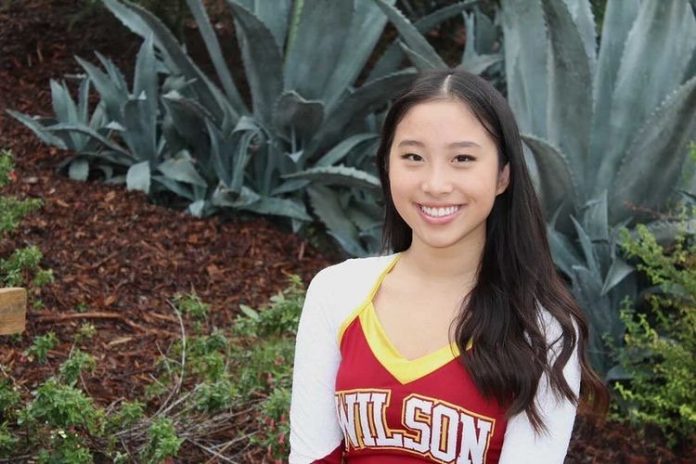 Surrounded by her fellow singers in Aria, Serena Yang basks in the euphoria of perfect harmonization at one of many local choir concerts.

Junior Serena Yang has always had a passion for the arts. Going from playfully singing karaoke in the car with her parents to competitive choir competitions just years later, Yang is one of the brightest voices Glen A. Wilson High School has to offer. Her joy for singing even carries onto the dance floor, where high standards of excellence and comradery mirror that of her other competitive endeavors.

Though, when Yang is not performing or practicing, she is most likely helping inspire the next generation of students to come to Wilson by promoting service, inclusivity and a sense of community as the president of KIWIN’S.

To start, Yang discusses her efforts as president, and what goals she has aimed to achieve.

“The main goal of KIWIN’S is essentially to build students’ character through leadership and service,” Yang said. “I try to maintain that goal by always remaining active with club members and really interacting with them on a personal level. I know that it is impossible to make every single meeting or go to every single event, but I think that by encouraging, as well as modeling consistency and repetition, students will be more motivated to join the club and reach out to others.”

Yang even discusses what makes her so proud to be president, and why she feels so honored to hold that position.

“I think that KIWIN’S does contribute towards not only making Wilson, but also the world in general somewhat of a better place,” Yang explained. “We like to work with a lot of greater organizations that work towards things, such as pediatric trauma prevention and bringing fresh water to developing nations. I would also say the greatest thing that we as a club have accomplished is raising awareness for so many admirable causes. Whether on a local, national or global level we always aspire to make an impact.”

Aside from KIWIN’S, Yang’s journey into choir was unexpected, yet it is safe to say that it was a pleasant surprise.

“I never really started singing competitively until about junior high,” Yang explained. “My earliest memories I can recall were really just me singing karaoke in my parents car, screaming at the top of my lungs. I am glad that I decided to continue with choir because singing has become a passion of mine.”

Yang has been a part of numerous choir’s throughout her academic career. Yet, one group seems to stand out above the rest.

“8th grade show choir really stands out for me because that was a really fun group to be a part of,” Yang said. “Even today, having been in choir at Wilson for three years, performing in front of a crowd can be intimidating. I think that the group really made me fall in love with choir and helped me overcome that fear.”

Furthermore, Yang looks towards the future for herself and her participation in choir.

“I really miss being surrounded by my fellow students,” Yang said. “That feeling of being encompassed by a group in perfect harmony just can not be emulated virtually, and I am really looking forward to experiencing that again once in-person school resumes. Even further down the road, I would love to join a collegiate level group if the opportunity ever presented itself.”

“My freshman year I originally started playing tennis. After a while, I kind of felt burnt out with the sport. It was clear it just was not the right fit for me,” Yang said. “Around that time, one of my closest friends had been pushing me to try out. After a bit of convincing, I eventually did try out and became one of two rookies that year to make the team.”

Despite the unfortunate circumstances of distance learning, Yang and her team have been making the best of the situation.

“It is definitely not the same,” Yang stated. “I think we are all just trying to make the best of things. We have all been working out on our own and partaking in zoom practices. A lot of us also follow various dance teams and studios on social media, so every now and then, my teammates and I will get together [virtually] to do the lessons that they offer.”

Additionally, Yang notes where she draws most of her inspiration.

“Of course my teammates always inspire me to constantly work and improve,” Yang noted, “But I would also say various dancers and influencers such as Sean Lew can have the same effect. I think that the fact that they can do what they do, and be as young as me is really inspiring and definitely something to admire.”

Moreover, Yang knows exactly what she needs in order to balance her activities while maintaining a healthy lifestyle.

“Sleep is the most important thing,” Yang explained. “Staying up late to practice and getting up early for zero period, I have to make sure I get at least six or seven hours of sleep so that the next day I can wake up feeling refreshed and productive.”

Finally, Yang explains how her parents have been her biggest source of support through everything.

“My parents are really busy,” Yang said. “Yet, they do so much behind the scenes. Whether it is driving me to competitions, supporting me financially, or waking up really early to help with whatever I need, they do so much that I can not thank them enough for.”

It is evident that Serena Yang is one of the brightest and most charming students Wilson has to offer. It would not come as any surprise if she continued to stand out like she does currently, on any team, in any choir or in any club that she is a part of in the future.

Working class heroes are the backbone of America