The music starts off with a thumping, tango hip hop piece, and a group of people start to dance as senior Isabella Max struts across the stage to the very center of the group. All eyes are on her as she moves perfectly with the music, her passion shown in every motion. The music stops abruptly, and cheers and applause fills the room. This is her live progress of becoming a professional dancer.

As a former member of Glen A. Wilson dance team and active me

mber of The Lab, Max continues to move forward in her dream of going to college and becoming a professional dancer.

Ironically, Max was not born with the desire to dance. Her journey began very early in her life as just a simple hobby.

“I was around two when dance [started to peak my interest] and as I got older it became a big hobby of mine,” Max said. “Around middle school is when I knew dance was something that I loved and could not see myself doing anything else in the future.”

Throughout middle school, Max joined a variety of dance groups, inside and outside of school.

“During sixth and seventh grade, I went to Newton middle school and joined the dance team, then I transferred to Orange Grove in my eight grade year,” Max said. “But at that time, I was [also a] part of Dellos Dance Studio in Walnut. I was there for a good two to three years, so I was balancing the school’s dance team and the dance studio at Newton. However, during my eighth grade year, I started to focus more on studio.”

When Max entered high school, she started to take bigger steps in becoming a professional dancer. 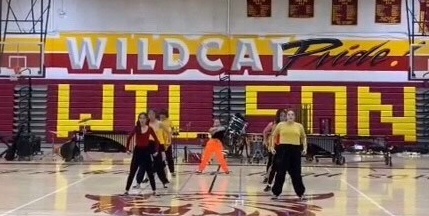 “I mainly did dance team here at Wilson for my freshman and sophomore year,” Max said. “I won first place at three events for our dance team solo competitions, and I was a part of many small teams. I competed a lot in high school, and that is when this ‘hobby’ started to get more serious for me.”

In her junior year, Max joined a dance team, The Lab, that changed her life for the better.

“I [received] many [incredible] opportunities this past year. When I originally [joined The Lab], we started with an exhibition, [which is] where we perform in front of a large audience,” Max said. “That was my very first performance with them. I also [have the opportunity] to train with my team two to three times a week for about three hours. I have also gotten the opportunity to train with them for Vibe, a large dance competition, but was not able to perform. However, training with them is life-changing and overall a great experience.”

Though dancing is something Max has a great passion for, she admits that is takes up much of her time.

“It was much easier committing my time to dance when I was younger, but as I grew and held much more responsibilities with school, committing my time was much more hectic, especially at the start of high school,” Max said. “Being a part of The Lab requires immense dedication and the ability to balance out your priorities. When I initially joined The Lab, I was not used to the long hours of practice, so it was extremely overwhelming. However, being a part of an incredible dance industry like The Lab means a lot of sacrifice, and I cut out a lot of time with my friends and other hobbies because I made that commitment to my dance team.”

“Dancing for me is so much more than moving around on a stage for a few minutes,” Max said. “Everyone and everything has a story and that is what I love to portray in the dances that I have either made myself or learned from someone else. As a kid, I had a difficult time expressing what I was feeling at times because it was hard for me to put it into words. Dance was and still is my escape to just let go. It sounds very cliché, but it is a common thing that dancers will have to say as to why it means so much to them.”

Max takes great inspiration from her own sister, Eilssa Max.

“My older sister is also a passionate dancer and is trying to make this her career,” Max said. “I look up to her so much and I have seen her grow into this beautiful young woman and obtain many incredible opportunities. Witnessing her journey inspires me to go through the same with my life and love dancing as much as she does.”

After high school, Max plans to move forward with college to help pursue her passion, but also stick to her old dance team.

“I do plan on going to college for dancing, but I really want to see where college takes me,” Max said. “[However,] I will still be at The Lab because they have a professional division for adults. There are exhibitions, competitions and a bunch of training for older people. I see myself staying here because it is such an amazing environment, and  they make you want to become a better dancer.”

Being the passionate and spirited dancer and role model she is today, it is not at all difficult to call Isabella Max one of the legends of Glen A. Wilson, and a definite icon in the world of dance in the near future.

How our Wildcats are spending Thanksgiving!